Don't Let the Lack of Basic Management
Skills Bite You on the Butt!

He was promoted because he was technically smart. He knew the company, the products and the customers. When he was initially promoted, it seemed obvious he should be the new leader. He knew the product better than anyone else.

But, after that promotion he never went to the next level. In fact, he was the first leader to go when the lay-offs came. We've probably all suffered from a boss who was technically smart, but lacked basic management skills.

Heck, we've probably all felt like, at one time or another, that we could use a refresher course in our own management skills especially when difficult people "problems" come up.

Having poor basic management skills WILL bite you in the butt.  You know - sneak up from behind you to startle, surprise and it could hurt you. 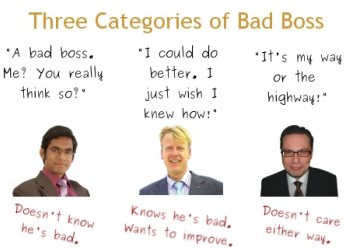 I hear it all the time in the training workshops I teach.  I'll ask participants to describe the actions of the best boss they've ever had. Together we create a nice, robust list in a couple of minutes. (BTW, listening is ALWAYS at the top of the list.)

Then we start talking about the worse manager they ever had. That's when it gets interesting.

People can talk about bad managers for hours! It could have been 20 years ago, but the bad manager's specific bad actions are NOT forgotten. "Bad boss" behavior is recalled in minute detail and with venom.

I believe that many "bad" boss actions come from decent people who lack basic management skills. After all, most managers never start their career hoping they'll be the worse manager ever!

And if their company doesn't offer business career training they're left on their own to make all sorts of mistakes...leaving 'wounded' people in the hallway. Only to be remembered forever with anger and resentment.  Missing basic skills will 'bite you in the butt' in these ways:

Don't Be a Bad Boss!

Find out more about our coaching and training programs with a complimentary coaching call, here.