Autocratic Leadership or Just a Jerk Sometimes? The One Skill That Can Rescue
a 'Sometimes Jerk' Leader...

How to Cultivate a Positive Sense of Self in Others

Here's an exaggerated example of autocratic leadership from a Cathay Pacific Airways commercial:


Having An Autocratic Leadership Style is when a leader dominantly tells
their employees what they want done and how they want it accomplished,
without getting the advice of their team. Someone with this style is often referred to,
behind their back, as a dictator. Studies show that if this Style is used predominantly, employees resist, productivity declines and turnover increases.

While we don't know for sure how the executive in the video leads every day, we can assume that his jerk behaviors lend themselves to an autocratic leadership style that matches the definition, above.  He's probably a dictator.

I had one of those bosses one time - her name was Beverly.  She was a lot like this guy.  I have no fond memories of working for her, and she taught me a lot about what NOT to do as a leader.  Bad bosses have a way of leaving a negative vibe that never really goes away, but they can teach us many things.

No Leader Is Perfect...  But There Is
Something That Makes a Difference 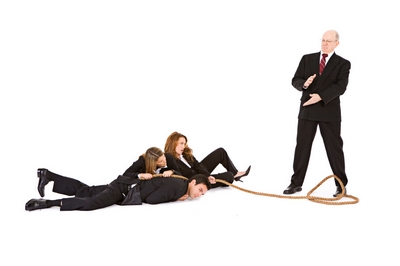 Another past boss, Tony, was not perfect.  In fact, he could be a jerk at times. But - I have so many fond memories of him. And, even though he wasn't perfect, I'd consider him a great boss and leader.

Leaders carry a heavy load of responsibility full of pressure, change and competing interests. Almost all leaders will occasionally have more than a few "I just did some thing that makes me look like a jerk" moments.

I believe that that is just part of being a leader and being human!  My old boss Tony certainly had what we thought were 'Jerk Leader' moments.  But the difference between Tony and Beverly was that Tony was really good at this important leadership skill: Cultivating a Positive Sense of Self in Others.

This is the ability to cultivate, sustain or build a positive sense of self (self-confidence) in other people. His ability to do that, with every person on his team, evokes in me now (20 years later) and then - trust, loyalty, thoughts of appreciation and a willingness to work hard for him and with him.

In this article you'll see how Tony, even though he was not "perfect", had mastered this crucial leadership skill: "The ability to Cultivate a Positive Sense of Self in Others,"
which is one of the Four Skills That Make or Break All Leaders.

What Tony Did Right - It's Why We Trusted Him... 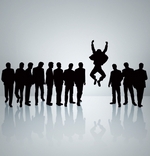 Here's How Tony Demonstrated the Cultivate a Positive Sense of Self in Others leadership skill:

For a free leadership skill quiz and three actions you can take right now to build your ability to Cultivate a Positive Sense of Self in Others, go to page 2 of this article.

Contact us for complimentary coaching call about changing the autocratic leadership style.